The roots of Hillsdale Hospital reach back to Dr. and Mrs. T. H. Midgley, who came to Hillsdale in 1912, in the hopes of opening a sanitarium in the community. The Midgleys worked to develop the facility that opened in September 1915. The Hillsdale Sanitarium’s goal was to enable invalids to regain health, as well as educate them on healthy living measures. Leasing issues cast doubt on the future of the hospital; as the Midgley’s lease was due to expire in 1920, with the school board taking over the building as an annex.  Davis Middle School is currently on the land where the first hospital building stood. 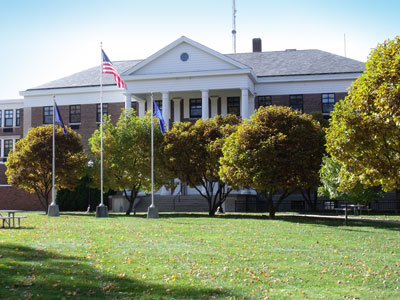 In 1920, the community called on the Hillsdale Common Council to organize a hospital board to ensure a facility would continue to serve the residents of the county. The original Board of Trustees consisted of Mrs. Lorenzo E. Dow, Mr. Harvey J. Burgess, Mr. Elmo Galough, Mrs. T. H. Midgley, Mr. O. J. Cornell, and Mr. F. A. Roethlisberger, Sr. Although there was agreement in the community that a hospital was needed, what kind of hospital and funding issues were in question.

A special committee was appointed to study the matter and give a report of findings. On August 2, 1920, 75 people attended the second meeting at City Hall. It was determined that Hillsdale should have a hospital and another committee was appointed to present to the mayor and the board of aldermen a request from the City Council for a special election as soon as possible. The special election was to put before Hillsdale voters a $25,000 bond to purchase property for a new hospital and equipment.

The City of Hillsdale assumed all responsibilities for the new hospital in 1921.  The City spent $15,000 to renovate the former home of William Waldron at 68 North Manning St. as the new hospital. The remaining $10,000 was saved for future additions and improvements. An open house was held on January 15, 1921 for the public, who were encouraged to bring donations of groceries and canned goods to stock the hospital’s larder for patients. Numerous local organizations and individuals endowed rooms and donated furniture, assisting the City in providing a state-of-the-art facility for the community.

A new wing was added to the hospital in 1932, increasing the ability to house 25 patients. The facility boasted a maternity ward, an emergency operation room, and x-ray equipment. Through the years, the hospital continued to improve and enlarge, thanks in large part to numerous donors, including the W. K. Kellogg Foundation. But, soon it was apparent the original building could no longer expand to fit the needs of the community.

The spirit carried on in February of 1940, as the new Hillsdale Hospital was dedicated. With a capacity of 65 beds, the hospital had a staff of 20, with 21 physicians and surgeons. The new building was located at 168 South Howell Street, where the outside facade remains to this day.

Through the years, the county population has grown and healthcare has advanced. The Hillsdale Hospital has continued to expand their physical plant, services, and expertise to meet the needs of the community. With a philosophy to serve the community and continually strive for excellence, Hillsdale Hospital has grown into a facility that serves Hillsdale County residents and attracts patients from many other areas, as well.

The Midgley’s would be amazed to see their humble beginnings in 1915 grow into a 21st century, state-of-the-art healthcare facility.

Nestled in a scenic county of some 47,000 residents, we are just over an hour from metropolitan areas, such as Detroit, Lansing, Toledo, Ann Arbor, and Kalamazoo. One of the unique aspects of our community is Hillsdale College, a private liberal arts college. Hillsdale County also offers 30 lakes, hunting, beautiful golf courses, and a rolling, picturesque landscape.

Hillsdale Hospital is a guardian of exceptional health services for our community, ensuring that families have access to high-quality care when and where they need it.

Through strong local governance, Hillsdale Hospital will lead the nation in defining and advancing the role of rural health providers.

Hillsdale Hospital exists to ensure that our region has access to a full range of high-quality health services close to home. Through the dedication of our talented staff and support of our generous community, we provide exceptional care to our neighbors.

This institution is an equal opportunity provider and employer.