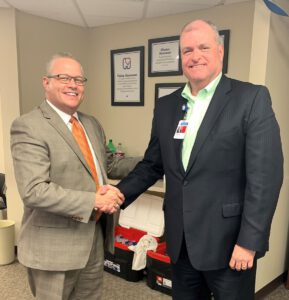 HILLSDALE, Mich.—After 40 years in community health and 14 of those as president and chief executive officer of Hillsdale Hospital, Duke Anderson is retiring. He has also been named the hospital’s first-ever president emeritus, honoring his impact on the organization during his tenure and signifying the advisory role he will play moving forward, supporting hospital administration on special projects.

“As Mr. Anderson transitions into his new life, we must pause to say thank you for his dedicated and loyal service,” JJ Hodshire, vice president and chief operating officer said. “For his spirit, his tenacity, his determination and his utmost love for Hillsdale Hospital.” (Hodshire will succeed Anderson as Hillsdale Hospital’s new president and CEO, effective June 1.)

Prior to his role at Hillsdale Hospital, Anderson served as health officer/chief executive officer of the Branch-Hillsdale-St. Joseph Community Health Agency (BHSJ) until 1998 and then as the county administrator for Branch County, Mich. In 2002, he simultaneously resumed the role of health officer until 2006 when he was recruited to Hillsdale Hospital, first as chief operating officer followed by his promotion to president and chief executive officer in 2007.

“Duke Anderson was ahead of the curve in population health, securing grant funding through the Kellogg Foundation in the 1990s to assess the needs and health disparities of the tri-county region he led as director of public health,” John Robertson, vice president of quality, said. “In his stead as president and CEO of Hillsdale Hospital, he continued his forward-thinking approach from his time at the health agency. He engaged the Joint Commission and the Michigan Hospital Association in a three-year high-reliability project aimed at moving the hospital healthcare field into the world of zero harm.”

Anderson invested in a staff education program to help hospital employees increase their skill level and remained committed to providing comprehensive healthcare services locally. In an era when many rural hospitals were closing their obstetrics departments, he kept and expanded Hillsdale Hospital’s OB, building a brand-new birthing center in 2014.

As America’s healthcare reimbursement model began to shift in the 2010s—particularly with public payers like Medicare and Medicaid which make up the vast majority of payers in rural hospitals—Anderson drove early adoption to value-based care.

“Duke was one of the primary leaders in rural hospital care in Michigan in the movement toward the pay-for-quality model, away from the pay-for-quantity structure,” Robertson said. “He led a group of rural hospitals into the national accountable care organization (ACO) limelight and was part of the Southern Michigan ACO of the Year in 2018.”

Using his coalition-building experience, Anderson was instrumental in developing a community health needs assessment in Hillsdale County. This collaborative included input from schools, law enforcement, human services, non-profits, public health and Hillsdale Hospital. The project resulted in numerous population health initiatives that have been implemented within the county to improve the health of its residents.

“His contribution to the healthcare field has been critical, ensuring that rural communities and hospitals always have a seat at the table,” Hodshire said. “He has been directly involved in the industry’s growth and its approach to challenges that threaten to wipe rural healthcare off the map. He is an influential healthcare leader in the community, the state and the nation.”

Locally, Anderson has served on several boards, including the Economic Development Partnership (EDP) of Hillsdale County. Understanding healthcare’s role in economic development, he supported business attraction and expansion efforts. His leadership earned Hillsdale Hospital the 2019 Investment Award from the EDP, which recognizes the organization that has made the most significant contributions to the community’s economic development efforts each year. He has also served on the boards of Hillsdale County Social Services, the Hillsdale Senior Center and others.

In 2016, he joined the board of directors for the Michigan Health & Hospital Association (MHA), testifying in front of the Michigan Health Policy Committee at the state legislature and presenting at MHA’s statewide conference on how to shift from volume to value in providing patient care.

“Anderson’s commitment to making care accessible for rural residents is demonstrated in the of new clinics, new outpatient services and new specialties, including urology and vascular care, provided by Hillsdale Hospital,” Hodshire said. “With healthcare available locally, residents don’t have to face the challenges of traveling outside the community to receive care or, worse, avoid getting care altogether.”

In addition to his involvement at the state level, Anderson has become an advocate for rural health at the national level, doing advocacy work in Washington, D.C.

He leads within the healthcare industry as a frequent speaker at national events, educating, encouraging and inspiring the current and future generation of healthcare leaders. He has been a featured panelist at both Becker’s Hospital Review’s CEO + CFO Roundtable in the fall and its Annual Meeting in the spring. In 2015, he made Becker’s Hospital Review’s list of Top Rural Health CEOs to Know, standing out among healthcare executives across the country. In 2020, the publication recognized Anderson for the sixth consecutive year.

“Duke Anderson has been a public servant his entire 40-year career,” Greg Bailey, chairman of the Hillsdale Hospital board, said. “In June 2007, the board of trustees entrusted him with the healthcare of our community. It is without reservation that we now say, ‘Well done, good and faithful servant.’”

Anderson and his contributions will again be recognized at the end of the June upon completion and dedication of the new  Anderson Pavilion adjacent to the hospital campus, funded by the Hillsdale Hospital Auxiliary.

This institution is an equal opportunity provider and employer.